It’s a clear night in Alaska and it’s…sunny. Sunny nights are a treat to those living at the planet’s northern latitudes during the summer months. On this night, tucked back in Aialik Bay, my tent rests mostly flat on a cobblestone beach – rain fly underneath to serve as extra padding for an otherwise unforgiving bed surface.

With fly off and blue sky overhead, I orient my dwelling to face tomorrow’s objective – a dihedral peak and snow covered ridge that emerges a few thousand feet above the ocean. I eye various approaches and pick out white ribbon waterfalls from an otherwise fully vegetated mountainside, and my head rests comfortably on pillow and rock. 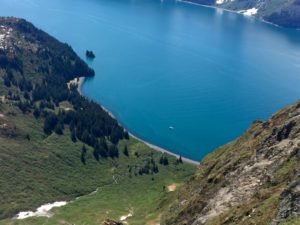 It’s early June and, though the landscape is starting to green, the bushwhacking is not yet at peak intensity. The Alaskan wilderness has countless rewards to offer those willing to struggle through thickets of alder, devil’s club, and other early succession plants that follow recent periods of glaciation. While it is the off-trail climber’s aim to utilize seasonality and clever route finding to minimize the ripped shirts and bleeding hands of a good bushwhack, this rarely comes to fruition in the middle of summer.  As the nighttime sun illuminates the mountainside above me, it quickly becomes evident that at least a little bit of my day tomorrow will be spent swimming uphill through the unforgiving ground cover. 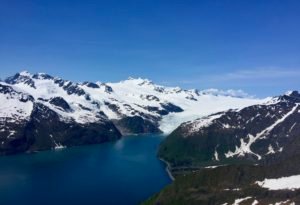 Still as I lay prone with mind wandering to memories of my previous three summers in Kenai Fjords National Park, I look most fondly upon those past outings that included at least a little bit of misguided adventure. Tomorrow’s ridgeline looms overhead, and it already has an air of foreboding. This time, though, I travel alone as my usual partner in deviance is down the bay enjoying the comforts of a public use cabin with his visiting parents. Tomorrow it is just the mountains and me – building upon a lifelong relationship of breathtaking views, new experiences, countless lessons learned, and the accompanying soul search of meditative time spent in the wilderness. 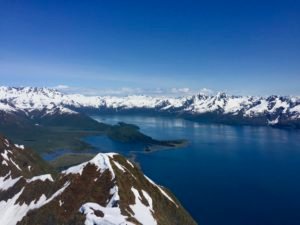 My eyelids start to get heavy.  I sneak a few final glimpses of the glaciated peaks lining Aialik Bay to the north, east, and west – recalling memory after memory in this magical place.  The fading alpenglow eventually convinces me to close my eyes, as pink mountainsides accompany late nights in mid-summer Alaska – where dusk and dawn are but brief visitors. I contort my body between uneven cobblestones and aim to rest easy on my oceanside bed as a flooding tide creeps up the beach. I anxiously close my eyes and mentally prepare for tomorrow’s climb knowing that after the stunning beauty of alpenglow dissipates some semblance of darkness will follow – whatever that proves to mean on this evening in The Land of the Midnight Sun.